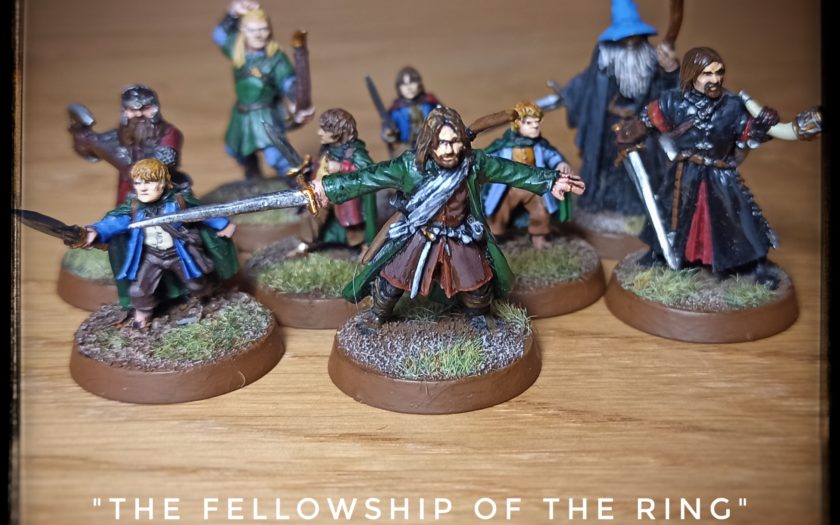 20 years ago the first part of the Lord of the Rings film adaptations “The Fellowship of the Ring” was released. Since this film and the associated tabletop are very important to me, I want to honor both with a contribution.

In 2001, I spent quite a bit of time at GW in Essen. When the first photos of the new Lord of the Rings miniatures were announced in the White Dwarf and even looked like what we had seen in the trailer before, we were all quite excited. The internet was still in its infancy by comparison, and I’m pretty sure I really only saw the first photos in the WD. I was 15 years old at the time and had only read “The Hobbit”. Even though I liked the book and had already read it twice (which was unusual for me at the time), I only knew Tolkien’s true epic from hearsay. That changed when I saw the trailer of “The Fellowship of the Ring” for the first time and had an idea of what was coming:

For once, the pocket money did not go to Warhammer, but was spent on the recently published paperback edition in the translation by Wolfgang Krege, so that I would at least already know the first book when I went to the cinema. In fact, I didn’t make it in time, so I didn’t know how the book ended or how the story even continued. The absence of Tom Bombadil, of course, I noticed immediately, so I already felt like a Tolkien connoisseur.

However, this cinematic experience is unforgettable for me to this day. The overwhelming idyll of the Shire, the menacing staging of the Ringwraiths, the soundtrack! And what a mad trip was the introduction with the battle at the Mount Doom and the terse history of the ring? The staging of Moria just blew me away. Atmosphere, tension, hustle and bustle, a cave troll! Then the Balrog. We had no idea what was to come in later films, but this on screen was already incredibly intense. I think I went three times to see the first part in theaters and have seen it countless times since then, especially in the Extended Edition.

After going to the cinema, there was only Lord of the Rings for me. All three films were released in December – practically for Christmas. For Christmas 2001 I got the green core box of the tabletop and the box “The Fellowship of the Ring” with the beautiful main characters modeled by the Perrys. I bought it already on the day of release, because there was the “limited” Bilbo in addition. I remember that I immediately started to paint the character models. The following figures must therefore have been painted almost exactly 20 years ago and thus unfortunately be some of the oldest, painted miniatures that I still have from my early hobby years. Since we are now celebrating 20 years of “Lord of the Rings – The Fellowship of the Ring” (kids, where did the time go?), I dug out the old figures:

There were painting instructions printed in the White Dwarf. The only techniques I knew were dry brushing and inking. Highlighting was desirable but difficult, there was nothing like layering or the like. In fact, I won the LotR painting competition of the GW in Essen with the Boromir above a year later – that would certainly not happen in the age of YouTube tutorials.

I liked the game itself. I had never played a fantasy skirmisher before and liked the flexible action with the heroes. There were only a few miniatures available so far and no one understood the choices. Why were Elves and Humans against Moria Orcs and not regular Orcs in the core box, so you could replay the big battle of the movie? Ordinary Orcs were only released as metal minis, which made it pretty expensive to want to replay the Battle of Mount Doom. At least I really liked the themed sets for key moments in the movie. I still think the Orcs are very nice and much more characterful than the later plastic Orcs. I still have some painted figures (also rather simply painted) and surprisingly many unpainted ones. Since the design is well suited to be used in other fantasy settings, I will decolorize the Orcs and repaint the entire group. You create new projects all the time, but I’m looking forward to it too.

Unfortunately, I no longer have many painted figures from the past, most I had sold as part of my hobby abandonment. Today it’s nice to see where you come from and what journey you have behind you. Who could be surprised – of course I now feel like painting LotR again, besides all other projects of course.