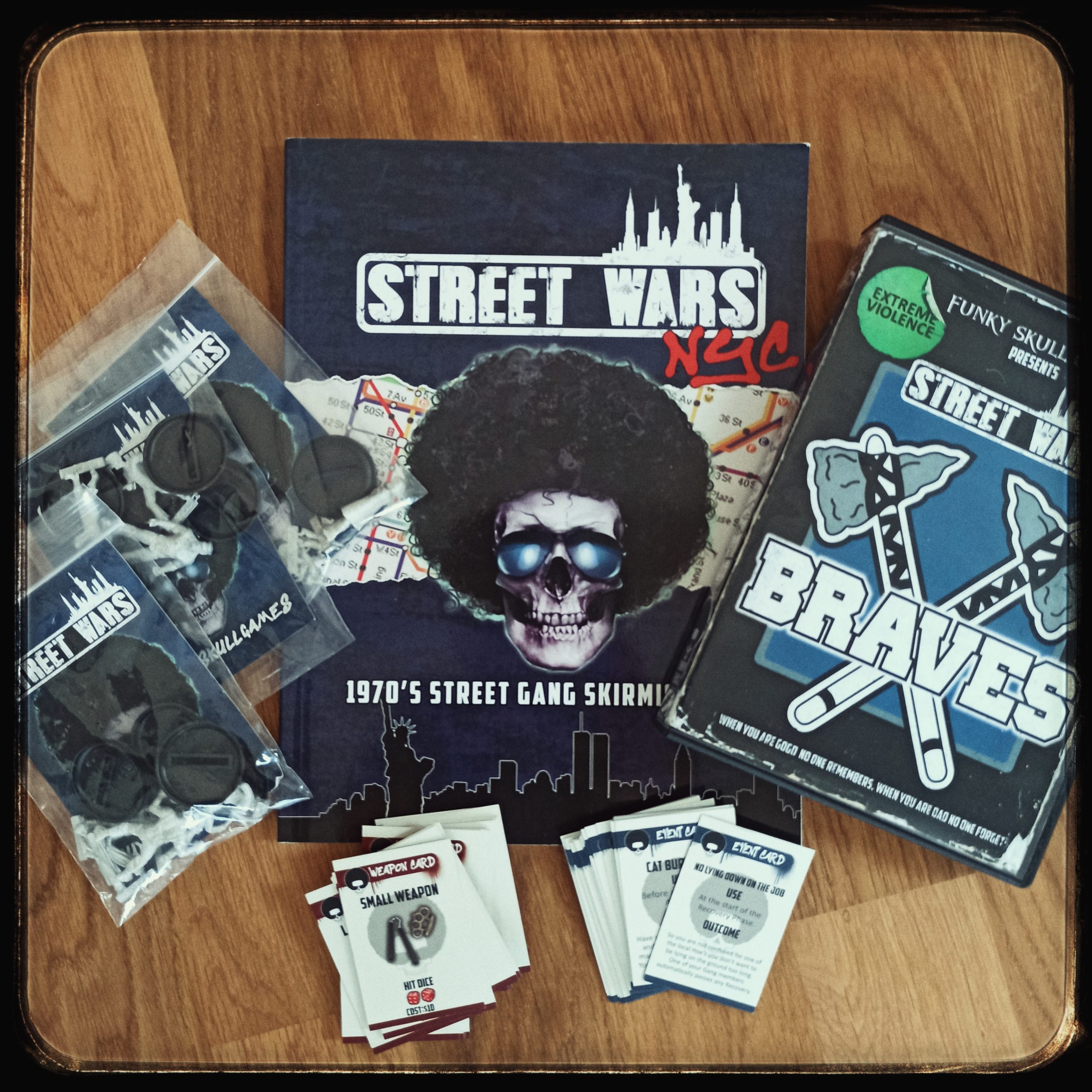 I have recently tried Street Wars NYC from Funky Skull Games. Actually, I wanted to have miniatures and ordered the rulebook without further ado, since it is currently significantly reduced. Together with the desired figures it arrived after post-Brexit-usual delivery time and I was immediately thrilled.

Funky Skull Games/Flags of War owner Ian McDonald wrote it himself and you can tell the book was fun to develop and is meant to convey. Without ballast it gets straight to the point, explains the rules and mechanics of the game clearly and understandably and expresses the author’s fascination for 70’s action movies between Die Warriors, Dirty Harry and Blaxploitation on every page.

In Street Wars NYC you play a gang of 5-10 members including a gang leader and fight turf wars with other gangs. You fight with your body, melee weapons or occasionally pistols in urban terrain according to fairly conventional skirmish rules. There are a variety of movement options with which you can roam the territory, rob houses and people in scenarios or spray graffiti, climb on houses and cars or fall off them. The combat rules are relatively extensive, but always kept simple and fast. The gangleader has special abilities with which he can motivate or command his members. I find the possibility to trash talk with the opponent very authentic: The leaders mob each other and whoever wins the argument has a small advantage in the next round.

You can add spice to the game with the presence of non-player civilians and/or police officers. Civilians move randomly across the board and block lines of sight and fire, they can be robbed and injured. But beware: some civilians are very defensible and can make your ganger’s life miserable unplanned! Policemen enter the field at some point and start arresting gang members or getting into fights with them. I haven’t tried this option yet, but I imagine it would be appealing – a bit of GTA feeling on the table 🙂

Optimally, you have a lot of urban terrain for the right atmosphere and game effects (cover, view block, fighting from an elevated position,…). The game is set in the 70’s setting, but this does not have an effect. You could also play it in the present. To what extent gangwars have changed in the last 50 years can be better judged by others; in any case, there are no semi-automatic or even fully automatic weapons in the game. A classic Turtles vs. Foot Clan scenario is also conceivable. Funky Skull Games offers custom characters, but you can play with anything you have.

In addition to the rules, the book includes rules for campaigns (gang members can improve or take permanent wounds), scenarios, prepared gangs, and some mercenaries that each gang can hire for more power.

For the game you need at least 5 figures per side, the rules and the cards provided, some dice and markers, measuring sticks and terrain.

What I find innovative is the use of dice. In principle, all tests are passed on 4+. Different gang members have different dice available depending on their rank. Their strengths are not represented by better values, but by “bigger” dice. With a simple W6 the test is harder to pass than with a W10 or even higher. This way you don’t have to keep values in your head or even compare them on tables, you just use different dice. Which dice you need for what is told by the individual cards you have for each gang member.

A nice detail is the “funk” value, something like street credibility, which has an effect on your gang and has to be rolled against from time to time. It can be reduced by events – suddenly your guys and gals are no longer the big guys in the neighborhood and are no longer capable of certain actions.

In the end, Street Wars NYC is a fast, uncomplicated game that doesn’t want to be a strategy simulation. It’s just what it is: you and your gang meet up with another gang and then it’s on until no one is left standing or a game goal is reached. I enjoy it and will definitely play it more often. Appropriate music in the background and the one or other rant on the sidelines increase the atmosphere immensely, of course.

Below you can find a Let’s Play video with designer Ian McDonald: