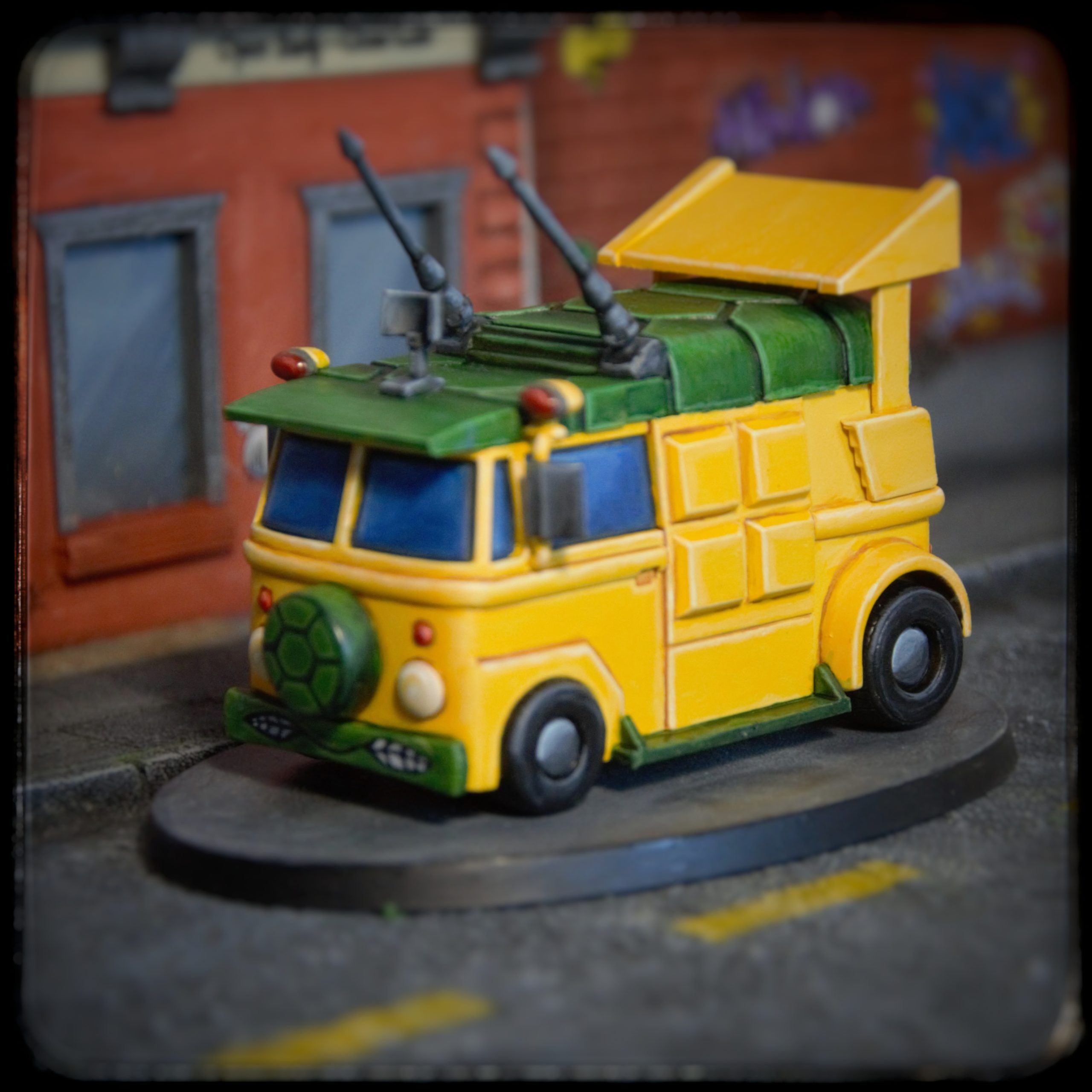 Finally, finally, finally I’m done with the Turtles van. Unfortunately not with the one I started, but that’s how it is sometimes. It’s best to start from the beginning:

When I expanded my little Ninja Turtles collection beyond the Turtles and April, Casey, Shredder and co joined the party, it was pretty clear that I had to have the Turtles van as well. I suppose I’m having so much fun with this Turtles project because I loved playing with the action figures as a boy. Next to the Batman figures, the Turtles were my favorites. I fought countless battles with them in my kid’s room – mostly against Batman villains, because I didn’t have all the Turtles opponents. As already written when I posted about Shredder: Shredder, Krang and the others were insanely difficult to get. In a way, I’m making up for it now. I still hold all of these characters dear to my heart, even if they are mostly childhood memories. It’s fun to collect them and now fill in those gaps from back then. The Turtles Van also came as a toy, with lots of action features and pizza throwers. These vehicles all had something to shoot with back then. I didn’t have the van either, but I could play with it at my school friend Moritz’s house. It was just too cool. I simply wanted to add him to my collection.

When I first thought about the van, I could not find any more or less suitable model for 28mm miniatures. I wanted to build one myself and searched quite a long time for something suitable and also cheap. I had no experience with such a conversion and didn’t want to invest a lot of money right away. At some point I found a model of an Italian van in a sale, which could have been converted with creativity and skill not 100% to the well-known Turtles van, but to something very similar. After all, the TMNT van always looks different and sometimes more fantastic, sometimes more realistic through the comic history, the animation series and especially through the movies. The plan was to use Milliput to create what was more outlandish (the turtle shell roof), plastic card to add more flat elements (the rear spoiler) and bits to add details (weapons on the roof). I started with the roof and unfortunately stopped there. I don’t know if I did something wrong with the Milliput, but it was an incredible smear at first and became so rock hard after drying that it was difficult to work on even with Dremel. The thought was to now roughly sand it to shape and then finish it again more finely with Greenstuff. The sanding was so time-consuming and exhausting that I parked the van in the corner in frustration and did not pay attention to it for months. Unfortunately, this kind of thing is always an open project in the back of my mind and pesters me every few weeks: “Hey, you still have to finish me!

In the meantime I had found out that there was a van model from Heroclix for the San Diego Comic Con 2016, but it was hard to find and expensive (about 40 dollars). A few weeks ago, I happened to find this very model in a British store for not even 4 GBP. Even with shipping to Germany, it was a bargain. I felt a little bad, because I would bury my own project with buying this and yes somehow also admit failure, but ultimately we also partly make artistic craft and then a learning process with setbacks is just part of it. I then decided to buy it, because for little money I get a vehicle true to the original, in which I do not have to invest more work, if I do not absolutely want it. The van was then there after a few days and turned out to be a somewhat small, but otherwise nice model.

As I’ve written elsewhere, I like it when the vehicles are also painted and visually blend into the overall look of the figures. Unfortunately, this is time-consuming and exhausting, which is why I probably won’t pull it off everywhere. In the case of the Turtles van, however, I wanted it that way, which is why I painted it again. Actually, it’s now exactly the same as before, except that I painted the one door orange-brown. The general appearance is the same as the van from the cartoon series. He only had the colored door as a toy version – the one we played with back then. So as a small homage, I painted the door the same way here. In fact, it fits well, I think. It could also be a conscious design decision.
Overall, I’m totally happy with the result. No idea what I’ll do with the original project. Maybe it will still serve as a car wreck in a post-apocalyptic scenario? Ideas are always welcome! 🙂