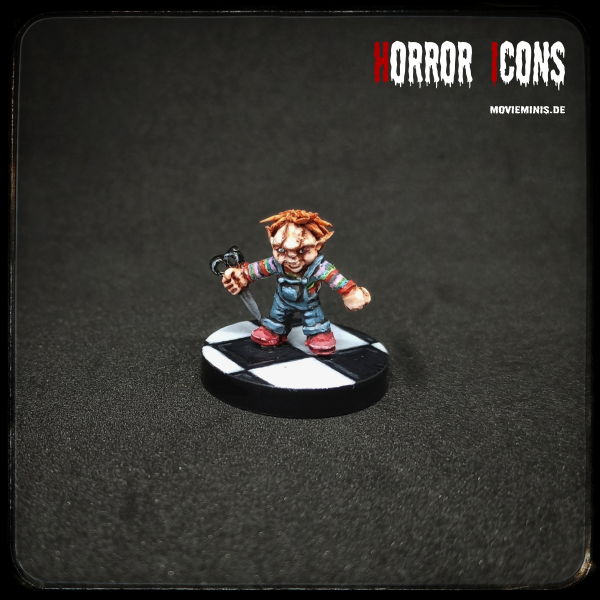 Since I never played Orcs I prefer the “Zomtober” over the “Orctober”, so it’s time for some bloody stuff now. October is for me clearly the month of autumn, horror movies and Halloween. Besides watching some classic and new horror movies (otherwise I’m not that much of a genre fan and like to put it off for the rest of the year), painting thematic miniatures has been on my schedule since last year. This should become a tradition, but it is only the second year so far. Optically the photos should differ, because they were all taken against a black background, no scenic shots. For the very different settings of the films I can’t create separate backdrops for each one and the dark background emphasizes the genre even more. Last year the triumvirate of the slasher movie Michael, Jason and Freddy made the beginning. Now it goes on with a less big (pun intended) character, which has its place in the genre: Chucky.

Chucky is one of those characters I knew long before I saw the film. I was still a child when others have already told me about it who have somehow already seen this film. Since horror movies, as I said, never really appealed to me, I made up the first part quite late in the sense of a cinematic education, but then didn’t care for. the sequels. I think the idea is quite funny and it has a good sense of humor, but it didn’t really entertain me. The fact that the franchise has remained so persistent with sequels to this day and has remained largely in the hands of inventor Don Mancini, is nevertheless remarkable to me. So here is my little (again!) tribute to Chucky.

The miniature is from L72’s Metal Miniature Musings and was bought by me when I ordered E.T. It is made of resin and meets Chucky perfectly – I think he is immediately recognizable. The modelling is a little bit knobbly, but that is not a big deal considering the size and the object (doll, not a real person). I wanted a base that fits the theme and decided to use a simple, black and white tiled kitchen floor. I am absolutely satisfied with this little killer and I just hope that he won’t start a life of his own now.