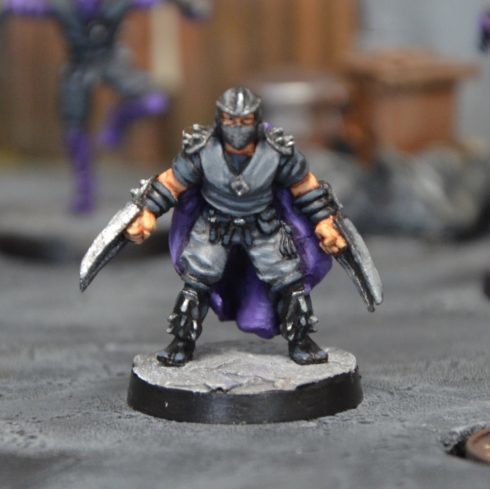 After starting the Foot Clan last week it was only a matter of time until the inevitable Shredder appeared on the streets of New York. I haven’t watched any TMNT cartoons since my childhood, but I remember Shredder very well as an always serious threat to the Turtles. He had fun scenes and never got what he wanted, but he was never silly and never appeared to be too weak. Being the Turtles‘ deadly enemy there was no question Shredder belonged to my collection.

The miniature is from Crooked Dice, just like the ninjas/Foot Soldiers. The model doesn’t have a cape, but in my eyes he inarguably needs one (plus that gives you the opportunity to stick closer to the original colours and still have a consistent look with the ninjas). Therefore I decided to sculpt a cape for him although I don’t have any experience in this, besides filling little gaps with GreenStuff. It took some time to have the cape more or less like I wanted it to be, but I’m very pleased with the result. Of course you can argue that the crinkles doesn’t look very realistic, but, well, it’s the first try and I learned a lot for next time. I’m absolutely good with the general appearence of the miniature and I think it fits nicely to the Foot Soldiers.