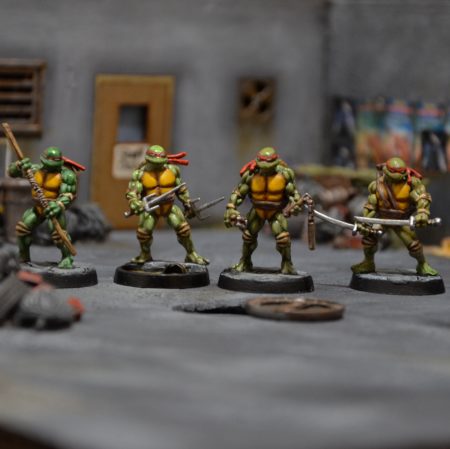 I don‘t know why but I felt that I needed to paint my turtles short before the end of the year. The Teenage Mutant Ninja Turtles are some of my big childhood heroes. We also had that big hype in the 90‘s with the awesome cartoon series and lots of action figures everyone wanted to have. I had some of the action figures but never a complete Turtles gang. Everybody was looking for Shredder, only few owned him. I think Krang was even harder to get, I never saw one myself.

When I saw somewhere around the Internet repainted Heroclix turtles I immediately fell in love with the idea to have those for my tabletop collection. Heroclix models are prepainted and may be less detailed as they are not made to be painted. They should be cheap and quick to be played with. That‘s fair enough but you need to keep that in mind. Some are actually pretty good casted, others are simply can‘t be used for higher level painting. The Turtles themselves are decent models, I‘m very happy with them. I just painted over the prepainted colours. Probably you can strip them before but I didn‘t dare to because of the very soft plastik.

When I painted them I decided to go for the classic bandana colours – all four in red. As far as I know the different colours were introduced with the Cartoons to make it easier for kids to recognize them and to of course to be able to sell more action figures.

I‘m very pleased with the result and will definitely paint more models from the TMNT cosmos – unfortunately Krang by Heroclix is also very rare and hard to get.