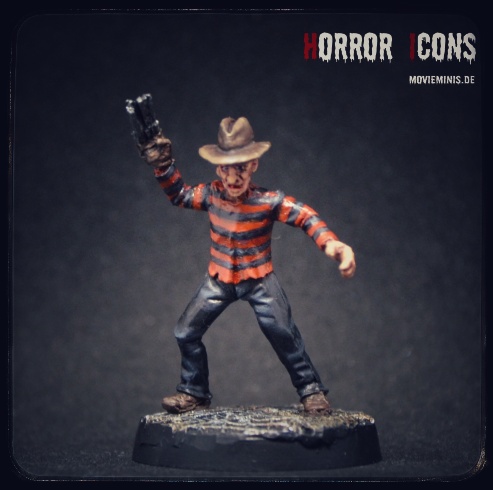 It’s been a month now since my last post. Sometime life just get’s in your way. I was sick, my kid was sick, lots to do in the office and then it’s just family time that comes first. I was working on Freddy the whole time, I just started after finishing Michael. Maybe it was not the best strategy to always try to squeeze a little painting time in a day that has already been too long. Then I paused a week and painted again for a few minutes. Not the best way to develop a feeling for the miniature. I’m okay with the painting result although it’s definitely not my best work. Right now I’m glad I can call Freddy done and start a new miniature with a clean mind. Do you know the feeling when you simply have to finish a project and start anew with another one? Nevertheless should be mentioned that I like the miniature very much (again Studio Miniatures). Freddy came with an additional right hand with a hatchet, but there was not a second I considered to take that one 🙂

Oh, and about the movies… I saw not a single one of the original Elm street movies. There are compilations on youtube with the most gruesome kills that I watched and I think I got a bit of a feeling of how the movies work. I did see the remake from 2010 with Jackie Earle Hailey though which I found not that bad, but I can imagine why fans didn’t like it.  I think I’m simply too much of a dreamer to like the idea of Freaddy 😉