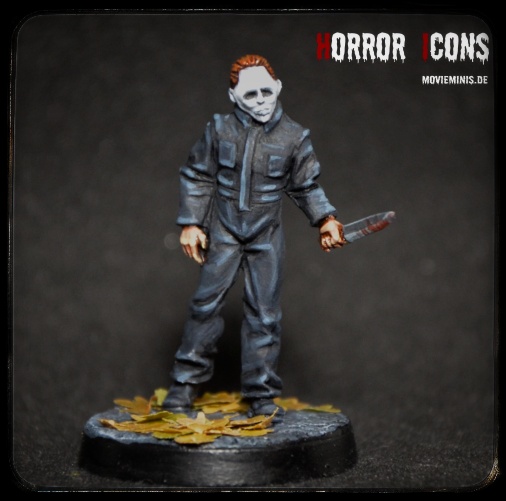 Happy Halloween everyone! I enjoyed painting Jason Vorhees so much, that I decided to go on with “classic” horror characters. Other than the “Friday” movies which I really don’t care about at all I have a thing for Michael Myers – even though I don’t like horror movies. To me he is not only the incarnation of a slasher, he is also almost always entertaining when he appears (that sounds strange, right?). Just a pure, evil slasher with a tiny bit of coolness. And we should not forget that we probably wouldn’t have seen Jamie Lee Curtis in her later movies if John Carpenter wouldn’t have casted her for the first movie in 1978 – what a big loss that would have been!

The miniature is again made by Studio Miniatures. Great sculpt with almost zero cleaning to be done. For the base I used the leaf stamp by Green Stuff World. The leaves give the miniature the right feeling of autumn and they are an easy way to provide Michael Myers with a thematic base. I’m totally happy with his general appearance. Trick or treat!

edit 2021: Have you seen the very first teaser for “Halloween Kills”? I’m posting it below and underneath I’ll write why I think it’s so awesome. Caution, spoilers for “Halloween 2018”.

In times when trailers already give away the whole movie and teasers are often not much help, I find this teaser simply ingenious. It is short and has it in itself. It immediately follows the end of the predecessor “Halloween 2018”, builds up a little atmosphere and then shows us Laurie and the other survivors as they move away from the burning house. The fire department drives past them with blue lights and sirens and Laurie screams “Let him burn!” in despair. You don’t have to be a connoisseur of the legalities of slasher movies to know what Laurie knows: putting out the house will save Michael, and it was all in vain. The horror continues. The teaser makes clear what is going on with a few seconds and the simplest means and leads directly to the sequel. There is no need for another trailer. I’m already hooked and don’t want to see anything more of “Halloween Kills” in advance. Oh, the anticipation 🙂