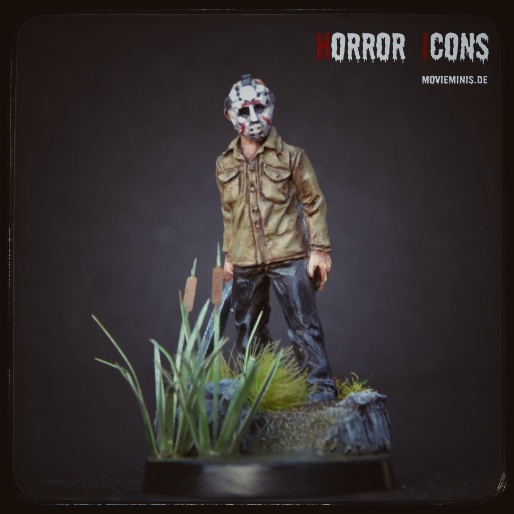 I don‘t really like horror movies, they simlpy don‘t entertain me. A bit of a different thing are Slasher movies, which often don‘t entertain me either but sometimes are quite fun. As I‘m not a fan I didn‘t watch a lot of the Slasher classics, but I think I saw all the remakes. The least I can remember about the Friday the 13th remake. Was it any good? I don‘t know. I remember pretty good though Freddy vs. Jason – we had a lot of fun with that one, but maybe it was just the beer.

I always kind of admired the status Slasher icons gained in popculture, be it Michael Myers, Freddy Krueger, Leatherface or Jason. When I discovered the horror range of Studio Miniatures I had to buy those (of course). The plan is to make a little scenic base to each of those fitting to the surroundings in their movies. Jason is connected to the Camp Crystal Lake respectively the lake, so I wanted him to stand on the bank of a water with some reed. I‘m very happy with the result, although now his machete is a bit hidden.