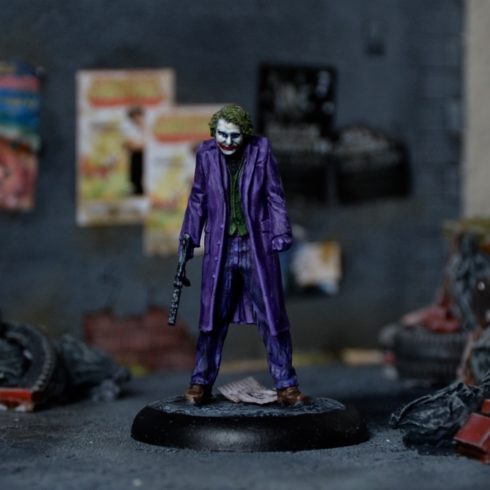 It’s a no brainer: As the DC fan I am, there is no way around painting a Joker miniature these days. Two days ago the Joker movie started in cinemas and I’m absolutely excited to finally see it. The Joker is a character I’m connected to since my childhood. The legendary performance of Mark Hamill as Joker in the Animated Series never let lose of me and so I followed with big interest the different Joker incarnations. As most of us I was not prepared for what Heath Ledger did in the Dark Knight movie. What an unforgettable performance, what an ingeniously new take on the Clown Prince of Crime. Although Joker always has been an insane character, Ledger and Nolan brought him to a new level of darkness and seriousness. I still can’t get enough of Ledger’s Joker.

This miniature was bought pretty soon when I re-entered the hobby. I needed it urgently, no question. It’s the old Knight Models metal version with the machine gun and (as far as I can tell from product pictures) slightely thinner shoulders than the new version. I particularly enjoyed painting his face as you have to be creative to recreate his make-up. It’s not really covering, you still need to see skin. How small or tall should his mouth and the scars with the lipstick be? I’m happy with the result and glad to finally add Joker to my collection. Hopefully I get to see the new movie as soon as possible and if Knight Models would ever release a Phoenix-Joker I also would paint that one for sure.